Doors open at 2:30pm. There is no pre-concert talk for this concert.
The Northwest Baroque Masterworks Project
Part of an extraordinary week exploring the music of G.F. Handel with Pacific Baroque Festival’s The Justly Celebrated Mr. Handel February 19-22, 2015.

A collaboration with the EMSI, Early Music Vancouver and the Seattle Early Music Guild Featuring some of Handel’s most glorious music, Theodora depicts the self-sacrificial love between a Christian virgin and a Roman imperial bodyguard. It serves as a timeless parable of spiritual resistance to tyranny and an indictment of persecution. Performed by 28 instrumentalists, 40 singers, and five international soloists. “Handel doesn’t miss a trick in creating spectacular choral effects; neither did music director Alexander Weimann in bringing them to life with theatrical cunning and an all-embracing sense of joy” The Vancouver Sun.

Special pricing on another Handel event for EMSI members! 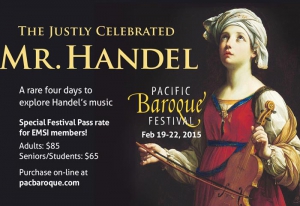 Pacific Baroque Festival
will be offering EMSI members a special rate for a Festival Pass: $85 Adults and $65 Seniors/Students. This rate will be available only for on-line purchases through the Festival website.