Music for the Pause

In solidarity and support of our Victoria-based musicians during the COVID 19 pandemic, Early Music  Society of the Islands, Victoria Baroque, EMV: Pacific Baroque Series, and Christ Church Cathedral are proud to co-present Music for the Pause, an exciting new online concert series created by violinist Chloe Kim. Scheduled to premiere on Friday, July 3 at 7:30PM, this series includes 11 unique programs that will be released weekly until September 11.

“Music for the Pause is a way of keeping myself and my colleagues, who are like family to me, creatively engaged as well as for staying connected to audiences during a very difficult and strange time,” explains Artistic Director Chloe Kim. “As someone who thrives on the intensity of a full performing schedule and the togetherness and sharing that comes with that, the concept of a summer without music was inconceivable to me. I like the challenge of having to work within certain parameters, whether it be social distancing regulations or personnel limitations, and I choose to see this period of time as an opportunity to be creative, rather than one of waiting or inactivity.” 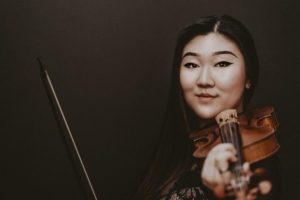 This initiative features a roster of a dozen almost exclusively Victoria-based artists. Local luminaries include Jeanne Lamon, Music Director Emerita of Tafelmusik, Victoria Baroque’s Artistic Director Soile Stratkauskas and the Victoria Symphony’s Assistant Concertmaster Christi Meyers. “It’s been an absolute joy to be making music again,” says 23-year-old Kim. “To be honest, I almost cried when I first got into the rehearsal space with my colleagues — I can’t describe how cathartic it was. It just feels good to be creating and feeling again, especially with such dear friends.”

The concerts, filmed in high definition video inside Christ Church Cathedral’s intimate and acoustically gorgeous Chapel of the New Jerusalem, will focus mainly on baroque chamber music with some repertoire spanning as late as the Early Romantic period. Each performance will also include short interviews between key musicians and celebrity guest figures from the international early music community, providing insight into their lives. Influential guests will include star violinists Monica Huggett, Elizabeth Blumenstock and more.

Concerts will be premiered and streamed weekly via Facebook Live, viewable on each of the partner’s Facebook pages: Early Music Society of the Islands, Victoria Baroque, Christ Church Cathedral Victoria, and EMV: Pacific Baroque Series will all simultaneously broadcast the concerts on Fridays at 7:30PM. In addition, each concert can be viewed on the Music for the Pause YouTube channel for the following week.

While access to the concerts is free, viewers are encouraged to donate to the project. All proceeds will go directly to paying the artists, whose incomes have been disproportionately impacted by the pandemic.